Why COVID-19 Infections May Resurge

Part I: The Numbers 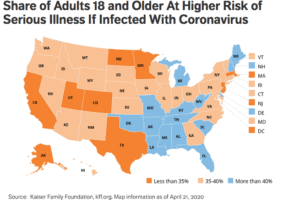 Since the beginning of the COVID-19 outbreak, data has been scrutinized for accuracy. Are officials capable of reporting correct numbers? How do we reconcile the lack of resources to properly test potential COVID-19 patients? Some experts are warning that deaths resulting from the COVID-19 could be 50% higher than what is currently being reported, and that these numbers will not be known until the pandemic threat recedes enough for officials to obtain a more accurate case count. Although medical professionals say that increased availability of testing is the most important aspect of ensuring accurate reporting, they are also pushing for the preservation of information and medical specimens to reassess numbers after the pandemic subsides. Until three weeks ago, U.S. officials were only counting COVID-19 deaths from Americans who tested positive for the virus before or after death. This is potentially excluding numbers from the reported count. Reducing the current threat will allow officials to go back and evaluate the true numbers.

Officials must decide how to handle the social and economic pressures to lift restrictions while also limiting the spread of the coronavirus. States are going about this in various ways, which will likely provide examples of how to efficiently handle lifting restrictions. New York, which has suffered the most from COVID-19 in the United States, is currently under a “New York State on PAUSE” executive order until May 15th. New York has also joined a coalition of states, including New Jersey, Connecticut, Pennsylvania, Delaware, Rhode Island, and Massachusetts, who are working together to reopen the economy. This effort comes after Governor Cuomo was quoted saying that, “We’ve shown we can flatten the curve and our efforts to control the spread of the virus are working,” indicating the apparent guidelines for the easing of restrictions. However, he also emphasized the importance of not letting the numbers increase again in the early stages of lifting restrictions. His plan to focus on the economy comes after this flattening of the curve, while later stages include strengthening the medical infrastructure, performing more tests, and increasing contact tracing to isolate potential COVID-19 patients.

Some states are now starting to lift restrictions by following phase plans. Although they vary from state to state, the ones that are starting to lift the restrictions look similar. Georgia, South Carolina, and Texas are a few of the states which are allowing businesses to open, such as gyms, salons, and some retail stores, although there are requirements in place to ensure that the stores follow certain guidelines for sanitation, screening employees, and keeping occupancy at lower than usual levels. However, the gradual loosening of restrictions does not mean that all states are seeing a decrease in the number of coronavirus cases. For example, Texas reported 1,000 or more new cases in a single day on seven occasions, with most of the cases being diagnosed within the past week and a half. The image below shows the increase in cases in the United States each day. (To access the interactive map on the CDC website, click here.)

An influential COVID-19 projection conducted by the Institute for Health Metrics and Evaluation (IHME) at the University of Washington currently projects over 143,000 COVID-19 deaths in the US by August 4th. On April 17th, the model estimated 60,000 deaths by August 4th. The director of the IHME stated that this shift is primarily caused by increased mobility of people, in which the easing of social distancing restrictions across the country will further increase. As individuals travel and gather more frequently in public, it will be easier for COVID-19 to spread. In addition to a surge in cases, the perceived impact of this crisis may also increase as widespread testing becomes available, and if case counts are retroactively increased based on new data.

The spike in cases will put pressure on state and national officials to slow the easing of restrictions, or to reinstate restrictions. Guidance from the White House advises states to be on a downward trajectory of confirmed cases for at least 14 days. If cases begin to rebound, it will, at the very least, slow the entry of a state into phase two. Governors in some states have expressed a willingness to put additional restrictions in place, if necessary, to slow the spread of the disease. Other locations, such as Hong Kong, were forced to increase restrictions after relaxing them, due to a second surge of cases. Restrictions may be targeted, however, to reduce pressure on the economy. In South Korea, nightclubs were advised to close for an additional month after a resurgence of cases were linked to them.

As the country reopens, it will be important to monitor the daily rate of COVID-19 infections and deaths. These numbers, and the public’s perception of them, will influence the state government’s decisions to re-implement social distancing restrictions. State governments can use the experience of other states and countries to inform these decisions.

Previous: COVID-19 FACT SHEET WITH PHYSICIAN-RECOMMENDED PREVENTATIVE MEASURES
Next: COVID-19 Update: What is the New Normal for Businesses?