The 2017-2018 flu season was exceptionally devastating for a multitude of reasons ranging from uncontrollable environmental factors to vaccine efficacy issues. With the 2018-2019 flu season rapidly approaching, it is imperative that the lessons learned from the last flu season, as well as years prior, are observed.

The 2017-2018 Flu season was up against unsettling odds before any human intervention took hold. VIGILINT Chief Medical Officer and Chief Executive Officer Dr. Sean Siler stated that “Temperatures were cooler earlier in 2017…Those earlier temperatures allowed the virus to begin spreading in the population much earlier in the year.” This early period of cooler weather in 2017 allowed for the earlier spread of the virus creating a broader impact.

In addition to the environmental causes, the flu vaccine was less effective than in previous years. Every year, members from the World Health Organization, the Centers for Disease Control and Prevention, the Food and Drug Administration, and other partners evaluate data from a multitude of sources to determine which influenza strains will be the most prevalent that season. The strains that struck most heavily in the 2017-2018 flu season were just different enough from those used in the vaccine to lower the vaccine efficacy, or percentage of reduced infection in the vaccinated group, to approximately 40%, meaning that the flu vaccine that year only reduced a vaccinated person’s chance of getting the flu by 40% compared to an unvaccinated person.

These factors caused the United States to have its worst flu season since the 2009 H1N1 (Swine flu) Pandemic, resulting in 185 pediatric deaths (80% of those deaths occurred in children who did not receive the flu vaccine) and 30,354 flu-related hospitalizations. For more information on the 2017-2018 flu season, please see our last year’s article. 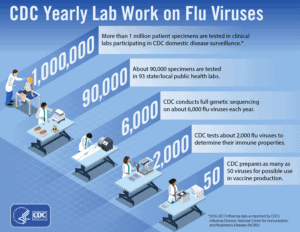 The issues that were seen in 2017 are partially out of our control. The early onset of cooler weather is not something that we as a society can governor. On the other hand, the efficacy of the flu vaccine is something that can vary from year to year. So far this season, there is strong evidence that the flu vaccine will be beneficial in preventing the flu and lessening the severity of those who do become ill.

How to Stay Protected

Get Vaccinated. The single most important thing that a person can do to prevent the flu is to get vaccinated. Even when the flu vaccine is less effective, such as the case last year, it is imperative to get vaccinated. It is estimated that from 2005 – 2011, the flu vaccine prevented approximately 14 million cases of the flu. Vaccination is especially important for those who are at higher risk of complications such as those who are 65 or older, pregnant women, young children, and those with chronic health conditions such as diabetes.

Be Proactive. Take preemptive actions in preventing the spread of germs. You can do this by avoiding contact with sick people, washing your hands often, using good cough etiquette, and limiting contact with others if you are sick.

Take antivirals if prescribed. See your physician early if you believe you have the flu. Your physician may prescribe you antiviral medications that can shorten your illness, make your symptoms milder, and may even prevent serious complications of the flu, such as pneumonia.

The flu is not regularly seen as a deadly disease to the general population, but with hospitalizations averaging between 140,000 and 960,000 and deaths between 12,000 and 79,000 every year, it is crucial that anyone who is medically able to receive the flu shot get vaccinated. Everyone over the age of 6 months and not allergic to one of its components is able to receive the flu shot unless otherwise instructed by a physician. Flu shots are typically available at doctor’s offices, clinics, health departments, pharmacies, and college health centers.