The Centers for Disease Control and Prevention (CDC) released a new report today that at least 704 people have been sickened by measles since January 1, 2019 – the greatest number of reported cases in 25 years, marking a sad and alarming milestone in the history of the disease.

The measles epidemic has been a major global health news story for several years. As reported in a VIGILINT blog post last month, the European measles epidemic started in 2016 and has shown no signs of slowing down. Cases tripled in Europe in 2018 as compared to the previous year, and at least 72 people are believed to have died from the disease. And in the United States, as of press time, measles is now present in more than half of the states, including: Arizona, California, Colorado, Connecticut, Florida, Georgia, Illinois, Indiana, Iowa, Kentucky, Maryland, Massachusetts, Michigan, Missouri, Nevada, New Hampshire, New Jersey, New York, Oregon, Tennessee, Texas and Washington.

Measles was declared eliminated in the United States in 2000, largely due to a widely successful vaccination program, and was considered a major public health victory at that time. Before the vaccine had widespread accessibility and adoption in the early 1960s, the disease infected millions and killed several hundred people each year. Now measles is no longer (if it ever really was) considered just a childhood illness. The preventable disease is highly contagious and can cause serious complications, including pneumonia and encephalitis (swelling of the brain) and even death. Besides the unvaccinated, children under the age of 5 and the very sick are especially vulnerable. 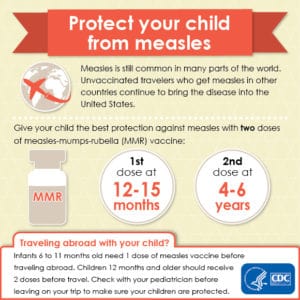 Measles is so contagious that the virus remains airborne in a room for up to two hours after an infected person has sneezed, coughed or even just talked.  Early symptoms include fever, runny nose, and red eyes and do not necessarily appear until 10-12 days after exposure. The classic red dots or rash appear 3-4 days after those early symptoms. Often, the early symptoms can be misdiagnosed as physicians are not accustomed to seeing measles. This was the case in March for the traveler who unintentionally spread the virus to at least 39 people from Michigan to New York after being wrongly diagnosed with bronchitis.

The CDC considers an outbreak as 3 or more cases in a definable population. The majority of the ongoing outbreaks are linked with religious groups that are either unvaccinated or undervaccinated. The largest occurrence of measles cases, approximately two-thirds of all cases, is in New York, specifically, Rockland County and Brooklyn borough. These cases are centralized around orthodox Jewish communities. The outbreaks began from travelers who were exposed to measles in other countries, such as the Philippines, Ukraine, and Israel, and were unknowingly contagious when they returned to the United States. Earlier this month in New York City, Mayor Bill de Blasio announced a mandatory order on residents in affected areas to get the measles, mumps and rubella (MMR) vaccine within 48 hours or get hit with a $1,000 fine.

According to the CDC Director, Dr. Robert R. Redfield, “roughly 1.3%, or 100,000 children, in this country under the age of two have not been vaccinated making them vulnerable to the current measles outbreak.” If 95% of the population is vaccinated, known as “herd immunity,” those too young or too sick to be vaccinated would be protected as an outbreak would be unlikely.  To keep herd immunity strong, vaccination rates need to remain strong.

This week (April 27- May 4) is National Infant Immunization Week, and major healthcare organizations including the American Academy of Pediatrics are ramping up public health awareness campaigns to promote the benefits of immunizations and to dispel misinformation (as it’s not just misleading, it’s actual misinformation) about the safety of vaccines. Public health officials and offices are using the hashtag #ivax2protect on social media to increase awareness of vaccine safety, including the staggering statistic that “for kids born between 1994-2019, vaccines will prevent an estimated 936,000 deaths.” And that vaccines protect children from 14 serious diseases by the age of 2.

From VIGILINT Physician and Chief of Aerospace Medicine with the MA Air National Guard, Mark R. Prete, M.D.: “Measles is a highly contagious viral infectious disease with an increasing likelihood worldwide of being exposed.” He added further, “there is no current specific antiviral treatment and the only reasonable countermeasure is mandatory documentation of previous vaccination or immunity if traveling.”

Previous: Measles – An Ongoing Epidemic
Next: Understanding “Elimination” vs “Eradication” of Infectious Diseases in The Wake of The Measles Outbreak