Measles is an extremely contagious disease that is caused by a virus. In fact, it is so contagious that if one infected person coughs or sneezes in public, 9 out of 10 unvaccinated people around them could likely get the disease. Measles starts with a fever, followed by a cough, runny nose, red eyes, and eventually a rash of tiny red dots. Measles can lead to pneumonia, encephalitis (swelling of the brain), and in some cases, lead to death. The disease is especially dangerous for young children, sick people, and those with compromised immune systems. Measles is transmitted through the air which means that it spreads through coughing and sneezing. What is really concerning is that the disease will stay airborne for around two hours meaning that you can get it just by walking through an area that is infected with the disease if you are not protected. Symptoms, starting with the fever, do not usually appear until about 10-12 days after exposure, and the rash appears about two to three days after that. Measles becomes contagious about 4 days before the rash becomes visible until about 4 days after the rash appears. Those who are strong enough to fight the disease could start to feel better in 7-10 days, and a second infection is unlikely after that as the body makes antibodies against the disease. However, for others, medical complications and death can occur. 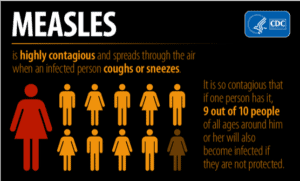 The measles epidemic started in Europe in 2016 and has only gotten worse. In 2018, measles cases have tripled in Europe when compared to the previous year with nearly 83,000 cases reported throughout the World Health Organization’s European region. This outbreak has all arguably stemmed from the Ukrainian outbreak where there were more than 54,000 cases and 16 deaths in all of 2018, which are remarkable numbers for a disease that is almost entirely preventable. As of the beginning of March 2019, Ukraine reports around 24,000 cases of measles with nine deaths. The number of infections had risen to 2,751 in one week and weekly cases are continuing to climb. The Ukrainian Ministry of Health continues to encourage labeling vaccination as a matter of national security since the health of Ukrainians depends on the overall level of vaccination throughout the country. “The root cause of the measles outbreaks … is a failure to adequately vaccinate,” says Katrina Kretsinger, the lead measles expert at the World Health Organization (WHO) headquarters. “Many people in many countries remain susceptible, and large pockets of susceptible persons can lead to large outbreaks.”

In other parts of the world, measles outbreaks are continually popping up, including the outbreak in Madagascar where 83,000 cases have been reported since September of 2018 with 926 deaths. The Philippines have reported over 16,000 cases, with 261 deaths. Japan has seen 258 cases this year, the worst in a decade. Unfortunately, the trajectory of more cases remains high due to several reasons –  no cure for measles exists, it is highly contagious, and low vaccination rates.

Transmission in The United States

While the majority of global measles cases are occurring outside of the United States, there is a growing measles crisis within the US as well. 2016 saw a total of 86 cases within the US. In contrast, the CDC has reported 228 confirmed cases so far in 2019. At the current rate, the US will reach its highest annual number of cases in the last 25 years by the end of 2019.

In 2018, the states of New York and New Jersey experienced an unprecedented outbreak of measles within the largely unvaccinated Orthodox Jewish population, which has continued into 2019. These states experienced more than half of all the measles cases within the United States in 2018, and the number continues to rise. Brooklyn alone has seen 25 newly identified cases within the last week. Currently, there have been 158 confirmed cases of measles between the boroughs of Brooklyn and Queens since October of last year, showing little evidence that the outbreak is subsiding.

Washington State, similar to New York, has communities with pockets of extremely low vaccination rates. Since 1 January 2019, Clark and King counties have seen 71 cases of measles. While 71 seems like a relatively low number when compared to flu rates and other diseases, to put this into perspective; the entire United States only experienced 55 total cases in 2012. In nine weeks and between two counties, regions in the US are surpassing annual averages.

Vaccination is Essential to Stopping the Spread of the Disease

Before the measles, mumps, and rubella vaccine was introduced in 1963, the WHO estimates that at least 2.6 million people died of the disease every year. According to Dr. Robert Redfield, the Centers for Disease Control and Prevention (CDC) Director, “the best way to protect against measles is to get the measles-mumps-rubella (MMR) shot. Doctors recommend children get 2 doses of MMR- first dose at 12-15 months and the second dose at 4-6yrs. If you’ve been vaccinated, you’re considered protected.” 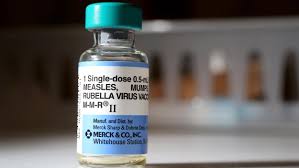 Prior to the introduction and widespread availability of the vaccine, the majority of the US population contracted measles and hundreds died from the disease each year. Today, many US doctors have never even seen a case of measles. In 1921, before there was a vaccine for it, diphtheria killed around 15,000 people in the US, and between 2004 and 2014, there were only two cases reported. In 1965, an epidemic of rubella infected 12.5 million Americans, killing 2,000 babies, and causing 11,000 miscarriages; since 2012, only 15 cases have been reported in the US. It is essential that we continue to vaccinate against these diseases lest they become as common as they were before vaccines.

Low measles vaccination rates could mean that one person who is infected could start an epidemic since measles, in particular, is extremely contagious. One thing that protects against epidemic diseases such as measles is what is called herd immunity. From vaccine.gov, “…when enough people are vaccinated against a certain disease, the germs can’t travel as easily from person to person — and the entire community is less likely to get the disease.” Herd immunity is extremely important in protecting against measles, as this concept protects people who are unable to get the vaccine and thus more susceptible to it, including young children, the sick, and people with cancer, HIV, and other immuno-compromising issues. The WHO is among the organizations where officials have identified vaccine rejection as a primary cause of increased cases. The organization stated: “We risk losing decades of progress in protecting children and communities against this devastating, but entirely preventable disease.”

In a study first posted in the Lancet medical journal, Dr. Andrew J. Wakefield wrote that the MMR vaccine was linked to, and may cause, autism. That paper was eventually removed from the Lancet and Wakefield was discredited. This report has done irreparable damage to vaccines as a whole, and there are many out there who still believe that MMR vaccinations cause autism and refuse to let their children be vaccinated. These people are known as “anti-vaxxers” and have been very vocal in opposing mandatory vaccinations, and vaccines in general, in the US. There has been study after study that proves that there is no link between autism, or ASD, and the MMR vaccine. Multitudes of doctors, the CDC, the WHO, and many other organizations have proved this theory through studies citing no link between the MMR vaccine and autism. Between 2003 and 2015, the CDC conducted nine studies; each concluded that vaccines do not cause autism.

Conclusively, it is supremely important to vaccinate against the measles because vaccinations save lives. Through the use of vaccinations, we can come close to eliminating this devastating disease and protect our loved ones from contracting this possibly fatal disease. Measles is continuing to spread; protect yourself against it.