2019 in Review: VIGILINT’s Major Health Stories of the Year

As a global health company, VIGILINT has a unique mission: we work 24/7 to protect the safety, health, and security of travelers around the world. The VIGILINT team writes blog posts to keep clients up-to-date on current global security and health events. From the US measles outbreak to Ebola on the rise, we’re bringing you a roundup of the major global health stories of 2019.

Measles is a highly contagious, viral illness that prior to the development of the vaccine in 1963, affected thousands of children around the globe each year. By 2000, the disease was completely eliminated from the United States. A rise in anti-vaccination propaganda and gaps in vaccination coverage has contributed to a recent spike in global cases. Just as in 2018, measles continued to be a huge risk for travelers in 2019. According to the Center for Disease Control and Prevention, in the United States alone, 1276 cases of measles were reported in 2019. This is a huge jump and 25-year high compared to the 375 cases that were reported in 2018. 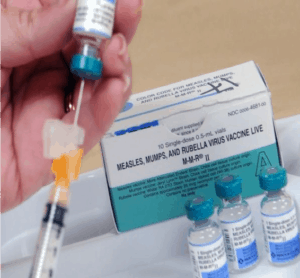 If the virus is contracted, symptoms are expected to start 2-3 days after infection. Symptoms of measles include:

The majority of the reported cases were in people who were unvaccinated. Travelers are at risk of contracting the disease when they travel to areas such as Ethiopia, Israel, the Democratic Republic of Congo, Sudan, Ukraine, Myanmar, Thailand, or Madagascar where the disease is spreading and if they have not been fully vaccinated. VIGILINT recommends that travelers be fully vaccinated at least 2 weeks prior to travel to ensure protection and to help to stop the spread of the disease.

According to the World Health Organization, non-communicable diseases are illnesses that do not pass from person to person. They are usually the result of a combination of genetic, physiological, environmental, and behavior factors. Non-communicable diseases are one of the leading causes of death and disability globally resulting in approximately 41 million people killed each year. There are four major categories of noncommunicable diseases: cardiovascular disease, cancer, chronic respiratory disease, and diabetes. Within the United States, diabetes and heart disease are two of the most prevalent.

The polio vaccination is over 99% effective. Like measles, gaps in vaccination coverage and the rise of the anti-vaccination movement have been some of the factors that have contributed to a spike in polio cases in 2019. According to the Center for Disease Control and Prevention, polio is a crippling and potentially deadly infectious disease. The disease is extremely contagious and spreads from person to person. Children under the age of 5 are the main demographic affected by the virus.

For a small, but unlucky group of people, the virus can invade the infected individual’s brain and spinal cord, causing paralysis.

The key to global eradication of the virus is global vaccination. Knowing this, global efforts to eliminate polio have increased drastically. In 2019, wild poliovirus was endemic in only Afghanistan and Pakistan. Vaccine-derived poliovirus was present in countries with low vaccination rates such as Angola, Central African Republic, Chad, Democratic Republic of Congo, Nigeria, Philippines, Somalia, Togo, and many more. As mentioned, despite efforts, the cases of both types of polio increased in 2019 due to several local challenges, gaps in vaccination coverage, and the rise of the anti-vaccination movement.

Though polio was eradicated from the United States in 1979, VIGILINT recommends that people who plan to travel internationally ensure that they are fully vaccinated against the disease prior to travel. Even if previously vaccinated, it is recommended that travelers seek the advice of a healthcare provider to determine if a one-time booster is needed. This is especially true if traveling to Afghanistan, Pakistan, Nigeria, the Democratic Republic of Congo, or any other country with evidence of either wild poliovirus or vaccine-derived poliovirus.

Ebola is a rare and deadly disease that is spread through direct contact with sick or dead people or animals who have been infected with the virus. Symptoms include:

News of the 2014-2016 Ebola outbreak in western Africa shocked the world and took international media by storm. Despite international efforts to contain the virus, in the largest outbreak of its kind, the virus took the lives of 11,300 people in Guinea, Liberia, and Sierra Leone. Although no stranger to Ebola and the devastating effects the disease can have on its population, the Democratic Republic of Congo DRC escaped the 2014-2016 outbreak relatively unscathed, and in 2017, the DRC received widespread praise for ending an outbreak just a mere two months after the first initial case was reported. Recently, however, the country has not been as fortunate.

In August 2018, the World Health Organization declared another outbreak of the disease. 2019 marked one year since the announcement of the outbreak but now, it is considered the second-deadliest Ebola outbreak in history. One year later, the fight to contain the outbreak is far from over.

Compared to prior outbreaks, healthcare responders have never had so many tools at their disposal to fight the virus. Some of these tools include clinical trials and a trial vaccination. Following the 2014-2016 outbreak, officials released studies and after-action reports analyzing the containment strategies used. These reports go on to suggest what should be done in future outbreaks to further improve rapid containment. Despite the new vaccine, promising treatment options, and lessons learned from the recent 2014-2016 outbreak, the disease continues to spread. These facts beg the question “why is the recent outbreak so difficult to contain?”

The answer is simple: we are entering into uncharted territory. Though humans have fought the deadly battle with Ebola for decades, until this point, the virus has never emerged in an active war zone. The outbreak began in the North Kivu and Ituri provinces. Both provinces continuously face the threat of multiple rebel and militia groups. These groups regularly interrupt the work of local and international aid workers that come to control the outbreak by threatening or injuring their staff, thus delaying the elimination of the outbreak.

It is expected that the disease will continue to spread into 2020. As new Ebola cases continue throughout North Kivu and Ituri provinces, challenges that make the disease more difficult to contain continue to evolve. Due to the fact that the disease is currently still active, and the vaccination has not been officially approved for prevention, VIGILINT recommends that all travelers avoid the Democratic Republic of Congo.

Our Medical Operations Center and 24/7 analysts will continue to monitor major global health news trends in 2020. Please subscribe to our monthly newsletter to keep up to date with our latest blogs and medical intel.

If you or your traveling companion wind up in a medical emergency situation anywhere in the world, VIGILINT offers a comprehensive Global MedAssist Program (GMAP) including medical evacuation to your hospital of choice, access to our 24/7 Medical Operations Center, and our board-certified Emergency Medicine Physician team. Contact VIGILINT for more information: 1 (919) 914-0900.

Previous: World Diabetes Day: Safest Way to Travel with Diabetes
Next: Airplane Food: How to Dine In-Flight Without Your Stomach Taking a Nosedive