North Korea will be sending athletes to compete in South Korea

In less than a month, millions of people from around the world will venture to PyeongChang, South Korea, for the XXIII Olympic Winter Games. In what South Korea has called the “peace games,” the North Korean and South Korean governments arrived at a careful negotiation last week where North Korea agreed to send a delegation to the Olympic games, just 50 miles south from the demilitarized border of the two countries. It has been 8 years since North Korea has participated in the Winter Olympic Games.

And this morning, just one week after the initial talks, it was announced that North Korea and South Korea will march together during the opening ceremonies under a united flag. They will also form a joint women’s ice hockey team.

The week-long talks have marked the first time in many years that the countries have had diplomatic relations. Part of the breakthrough discussions included South Korea halting some of the sanctions against its northern neighbor to encourage the country’s participation in the games. The progress is considered a positive step in inter-Korean relations and should quell some fears of North Korea disrupting the Olympic Games, as they did in 1988 before the Summer Games in Seoul.

South Korean President Moo is hoping the global event will cultivate a legacy of new growth in the area.

The agreement to send athletes and the lifting of military sanctions, if only temporary, symbolizes the spirit of the Olympic Games. The flame from the Olympic torch serves as a reminder of the ancient Greek tradition of a temporary peace between hostile countries during the games.

Due to these breakthrough discussions, an overt act of aggression now seems unlikely during the games, but there remains speculation of cyberattacks or other attacks targeted towards anti-regime individuals. It remains vital for attendees and athletes to be vigilant over their health and safety and to recognize that, despite these agreements, there have been undisputable mounting tensions over North Korea’s nuclear and missile programs. 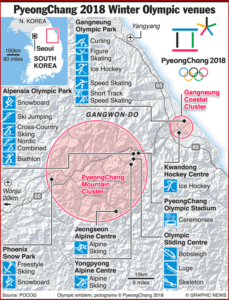 For attendees and athletes:

If there is an attack, PyeongChang’s medical and transportation infrastructure is likely insufficient to manage mass movement and provide emergency medical treatment following an attack. South Korea’s emergency medicine and trauma capabilities are limited, as only 10 of 17 planned trauma centers are in operation across the country – with none in Seoul.

GangNeung Asan Hospital (pictured below) is the designated hospital for the Ice events in the Coastal Cluster of the Winter Olympic venues, and is equipped to handle moderate injury or illness but lacks key capabilities for trauma patients and others with complex needs. In addition, this hospital does not regularly stock Rh- blood.

The lack of Rh-blood products is a problem with most South Korean hospitals, thus the medical facilities rely on a series of volunteer networks and external blood banks to care for patients with Rh-blood. There does not appear to be any clear strategy for managing patients with Rh- type blood who may require emergency blood transfusions, which could cause life-threatening situations.

Due to these limitations (and others), VIGILINT has created an Olympics telemedicine program which includes access to our global network of physicians, and if medically needed, a Cleveland Clinic consult. This program features two hours of physician support and the provision of medicines if needed while in country.

All attendees and athletes should consider visiting your healthcare provider this week about the medications and vaccines that are recommended for you. The CDC urges attendees to take the hepatitis A, typhoid, hepatitis B, Japanese encephalitis and rabies shots.

Previous: Flu Season is Upon Us
Next: Stop the Bleed: What You Need to Know in Case of a Life-Threatening Bleeding Emergency